Since their introduction in 1957, rigid polyurethane foams (RPFs) have undergone numerous formulation changes to meet different product requirements. While the majority of RPFs are used as low-density thermal insulation (98% in the year 20001), advances in formulation capability and the ability to strictly control RPF properties have allowed these materials to be used in more demanding applications. The density and chemistry of the foams are altered to meet requirements of strength, impact absorbance, fire resistance, and insulating char formation. RPF material properties that facilitate hazardous material protection and isolation will be discussed here.

Hazardous material container design requires considerations of shock absorption, fire protection, and conditions during use. Due to a combination of favorable properties, RPF has been installed in nuclear material containers by General Plastics for 39 years.

Designing a container for protection of its contents against destruction by impact requires knowledge of the magnitudes of kinetic energy that must be absorbed in an impact and how much shock the contents can be allowed to endure. Container design also involves accounting for non-ideal responses, safety factors, and conditions during use. Selection
of a cushioning material requires an understanding of the material properties under all conditions during use.

The performance of foam can be changed in a predictable way by adjusting density, which can be done precisely from 4 to 40 lb/ft3(PCF). Figure 1 shows the dynamic crush strengths of some RPF foam of various densities that have been used for cushioning. Notice that there is an initial increase in resistance followed by a plateau region in which irreversible material deformation is occurring. After the plateau, there is another increase in resistance to deformation. This second increase occurs when the foam is compacted to the point that it begins to act as a solid material. Foam’s capacity to absorb energy is proportional to the area under each of the curves in Figure 1. A mass impacting a lower density foam such as the 5PCF material will initially experience less shock (lower G forces), but will travel through more foam before stopping when compared to a higher density foam. In Figure 2, each curve corresponds to the same amount of energy absorption. Notice that the initial stresses of deceleration would be lower using the 12PCF material, but the maximum shock would be higher for that particular energy absorption. If the container design permits, the more constant resistance to deformation of the lower density foams can be used with higher loads if the loads are spread out over a larger area of foam. 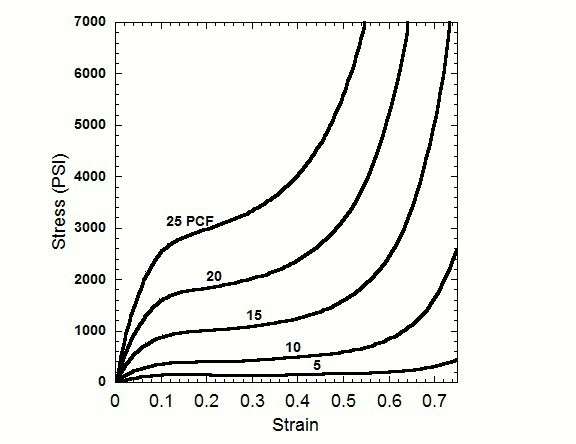 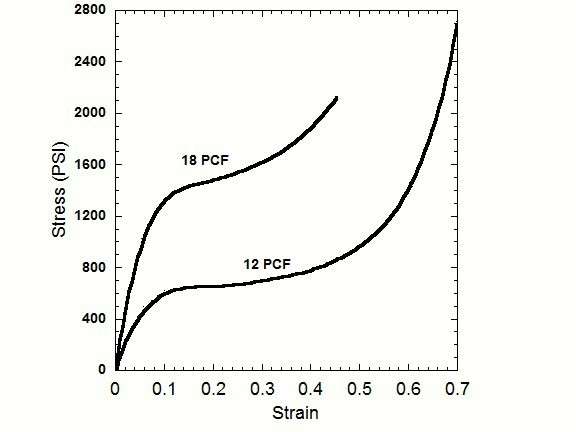 Other choices for impact limiting materials include flexible polyurethane foam, wood, honeycomb materials, and other larger metal structures2. The choice between flexible and rigid foams depends on the acceptance of a rebound. Large magnitudes of force stored in flexible foam during an initial impact may cause the contents of the foam to be redirected in unacceptable directions and will increase the distance of travel. RPF materials resist the effects of solvents and water. They are not a food for fungi, and will maintain material properties for decades. RPF is anisotropic, whereas the performance of honeycomb and other metal structures depends strongly on the orientation of installation, and sometimes on the construction of the joints. RPF can be poured into complex container designs, saving assembly costs.

RPF will also protect against conditions of extreme heat and fire. In the absence of additives used to alter polyurethane’s response to fire, the large potential energy possessed by the organic material could negatively impact thermal conditions. Instead, a formulated material will insulate a container’s contents from heat, absorb thermal energy, and form a growing layer of char (intumescence). The layer of char will provide additional insulation, prevent oxygen transmission through material cracks, and extinguish smoldering fires3. Additives accomplish these tasks by different mechanisms. Intumescent char is produced with phosphate additives or acid-treated graphite. In the oxygen-free environment produced by char and released gasses, thermal energy is absorbed during the breakdown of the urethane material. In some formulations, metal hydrate additives are also used to absorb thermal energy and release non-combustible gasses.

RPF also has the ability to dissipate blast wave energy through the destruction of the foam and other mechanisms4,5. Cooper and Kurowski placed charges of various sizes inside varying densities of RPF and measured the cavity that the blast created. They found an excellent correlation between the cube root of the explosive weight, the RPF density, and the blast cavity diameter, shown in Figure 3. All of the lines in Figure 3 were constructed from Equation 14. The blast cavity size was then converted into an equivalent weight of foam and compared to the explosive size. The plot in Figure 4 which shows the ratio of crushed foam to explosive weight versus RPF density was created using Equation 1. The maximum position in the curve between 6 and 7PCF corresponds to the foam density where the most blast energy is absorbed through the destruction of foam5. This density range is between the higher densities where individual bubbles exist within a polymer matrix and the lower densities where the polymer matrix is made up of struts connected by thin windows. 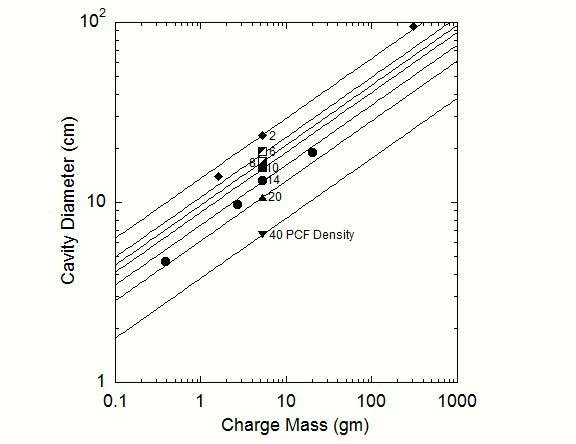 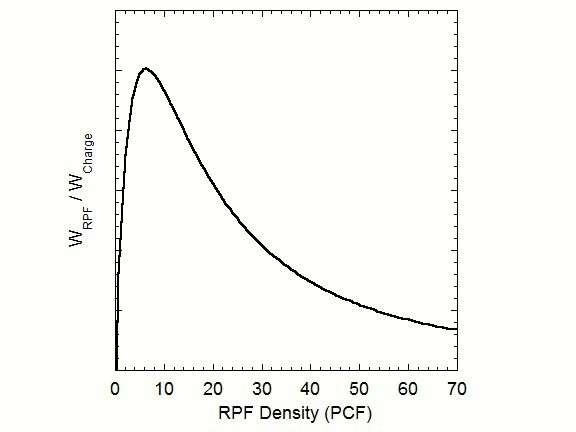 Explosive blast damping and containment structures made of RPF and sand are currently used to isolate munitions. RPF was chosen primarily for its fire handling character and long product life. The RPF used in this application has a density of 7PCF, the optimal density for blast wave absorption through the mechanism of foam destruction. The resulting structures are efficient enough to facilitate up to eight times the storage density of class 1.1 explosives compared to conventional barricade system7.

There have been several other proposed uses for the foam that employ the energy absorbing capability together with the inherent standoff distance. These have included the protection of a ship’s hull or a vehicle’s underside against mines and in the protection of building structures such as girders5,8. In an internal report to Sandia National Labs, Woodfin concluded that 6 to 9” thick, 6 to 8PCF foam would help to protect structures against blast wave damage and reduce fragmentation of concrete walls5.

Rigid polyurethane foam can be formulated to meet design requirements in the areas of fire and heat handling, shock absorption, and blast wave reduction. RPF has been used in several hazardous materials handling applications, some of which were presented here. RPF material properties and data have been presented in an effort to facilitate new applications and designs for hazardous material handling.